Gatorade has made a touching animated short telling the lifestory of Argentinian soccer legend Lionel Messi, debuting to coincide with the World Cup.

It tells the story of Messi from babyhood, when he kicks away his tears, to his boyhood in Argentina, where he shows early promise but suffers a big setback after being told he has a growth defect. However, he is visited by an adult vision of himself who tells him not to give up on his dreams. He goes to on play for Barcelona, but has both ups and downs on his way to becoming a top player; at one point, the child version of himself appears and reminds him to keep dreaming big. (He’s also, briefly, seen chugging down a can of Gatorade.)

The film ends with Messi dreaming of a World Cup win for Argentina. 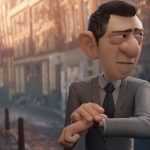