A hand drawn animated documentary, following the rhythms of a day in Yorkshire. It captures the sound of Yorkshire, from its multicultural and bustling cities like Bradford and Sheffield, to the delicate sounds of birds in the country side and the hypnotic rhythm of the motorways and train tracks.

Made for BBC4’s ‘Listen to Britain’, where 12 films were commissioned to show a modern version of Britain, based on the war time film by Humphrey Jennings.

Made in collaboration with BBC, BFI and Wingspan Productions 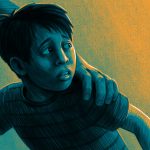